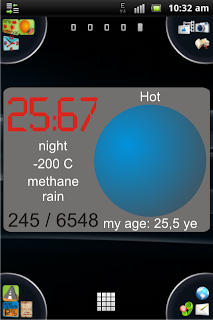 "Why, indeed, the whole  Earth products are designed only for earthlings?" - we thought. After all, it is suspected that the aliens are already living among us. There are many films on this subject, various anecdotal evidence. Earthling can set the local time, arriving in another country, but also can have the widget of local time of their native city. And why the aliens are worse?
And we decided to create an application with any time settings. It is not limited to 24 hours in a day, 356 days a year, or 60 seconds in a minute. Set up any day, any orders of minutes or seconds. For example, on Mars the day is for 37 minutes longer. That is an almost 61,5 minutes in one hour. But a year on Mars is almost twice longer that the  Earth`s. Well, since you can set your telephone clock. You can choose an icon for your planet, to indicate possible weather events. And then all of this place as a widget on the desktop of mobile phone - next to the widget of Earth`s time.
If you're not an alien, you can not ignore the possibility of removal of you by aliens to their planet (ask Malder about it). And you're there, and all aliens are surprised when you will set time on your phone to the local time. You also can not rule out opening in the near future hyperengines, we can not take into account the colonies on nearby planets. Or maybe you just fell from the moon. So set up a lunar time. 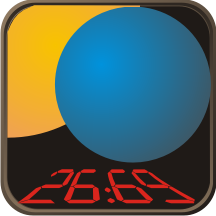